I had only recently settled into my downtown flat. The best friend and I had been invited to a sex toy party on our only free night, but were dying to check out the local hotspots. After making an appearance, purchasing our new toys, including a very potent arousal cream, we slipped out with a common mission in mind. We drove back to my place, changed into our club wear, dabbed a bit of the cream on our clits (although we were plenty aroused already), and rushed out the door.

It was already approaching midnight when we reached the first club. That cream had already worked its magic, and I’d been sure to tuck it into my bra before heading out. The place was packed though, and I was in no mood to wait in line. I grabbed her hand and walked up to the doorman after one glance at the ridiculous line. He looked at us for just a moment, checked our ID’s and wordlessly unhooked the velvet ropes that let us in. My best friend stared open-mouthed, incredulous that we had cut the line so easily. I just laughed and grabbed her hand so we wouldn’t lose each other in the crowd.

We pressed through the throng of people, strange hands pawing at us, drunken, flirty smiles and inviting eyes on nearly every face. We ordered our first round of drinks at the balcony bar and stared over the rest of the club that we could see.

The balcony was decorated with a luxurious feel. Leather seating areas looked up to mirrored walls and stripper poles were mounted in every open section. The first floor was designed with the same mirrored walls, but had stages for the poles, an open dance floor with two cages containing burlesque dancers in the center, and VIP seating areas arranged on the two rear corners of the room. The basement, where we’d peeked in earlier, was dank and steamy, but had a more relaxed floor plan and “coed bathrooms” that we’re clearly intended to be used for more carnal activities.

It wasn’t long before someone she fancied was standing nearby, offering her a drink. He was Australian, blond, with startling blue eyes, and his accent made her giggle. I chatted with them for a bit, then excused myself to “buy another drink”.

I did refill my glass, but then I made my way back down the stairs and onto the dance floor. Although I was born without any semblance of rhythm, I sauntered through the sweaty, throbbing crowd, winking at the guys and girls who grabbed at my ass and continued prowling for a very specific kind of person.

I found him dancing with a crowd of friends. He fluidly pulled me in front of him and moved against me in time to the music. I tried my best to copy the moves I’d seen the entire club perform with ease, but mine were only vaguely similar. His mind however was already somewhere else and he let his hands roam over my body. We bobbed in time, me letting the movement of his body and the momentum of the crowd take over, and I decided to end the charade. There was no reason to keep up the game, I was there for only one purpose, and it was clear this man was hot and ready.

I ran my hands over his tight, hard body. He was muscular, a few inches taller even though my heels exaggerated my height, and deeply suntanned with hair as black as his coal colored eyes. His coloring, features, and the way he moved betrayed his Spanish heritage, but he dressed like any other upper class American urbanite.

I kissed his lower lip seductively when he brought his face down to mine. He teased the hem of my skirt as if he couldn’t decide whether or not to cross that line. I felt his breath catch when I pressed closer against him for just an instant, giving him a feel of my entire body against his.

He turned me around, pulling my hips against his and I swiveled them expertly. I might not have had any rhythmic ability, but I knew how to give a man what he didn’t know he wanted. He spun me back, stared in my eyes for a minute like he was trying to decide what to make of me, and I knew it was time to make my move.

His hands were at my hips again, reaching for the hem of my skirt mere inches away. I surreptitiously pushed his fingers beneath the fabric and he immediately encountered the wet little triangle between my thighs. The bulge in his pants was straining hard against my leg and I knew he wouldn’t last much longer. I slid my arms around his waist and stood up on my tiptoes letting my lips brush his ear and whispered “I can fuck a hell of a lot better than I can dance.”

That was all it took and he quickly led me to the back of the room. The DJ booth was in the back center of the room, directly in front of where we stopped. I sat down on a short, barely hidden staircase that led to a VIP area. No one was paying attention to the two of us and I spread my legs, letting him feel my hot, soaking wet little cunt, and watched the expression of pleasure and amazement on his face.

Suddenly, he was exposed, kneeling between my legs. Pushing aside the thin strip of my thong, he plunged inside me, thrusting almost in time to the music. The volume of the crowded club allowed me to moan and cry out next to his ear. He buried his thick cock inside me, both hands clutching my hips, and I came twice. I shuddered with each orgasm, euphoric with satisfaction, and looked over his shoulder locking stares with a bouncer who had been watching us the whole time and stood stroking himself. My dance partner exploded inside me just then, filling my tight little pussy, and letting some of it spill onto the staircase.

I tightened my cunt around the head of his fat cock then, loving the way his body had responded to me, then our bodies finally parted. We sat there on the steps, a bit in shock at what had just occurred, and he offered to buy another drink. I nodded absently, planning my exit, and we headed in opposite directions. I slipped off to the ladies’ room and felt his hot, sticky cum dripping down my leg as I walked. I relished the feeling and shivered with ecstasy at the naughtiness of what I’d done. Inside the restroom, I decided not to clean the mess, but just to straighten my hair and touch up my lip gloss from the tube tucked into my bra. I felt the arousal cream peeking out of its hiding place next to the gloss, and smiled at the irony.

When I walked back out to the dance floor to meet my best friend, I was met again by the hungry stare of the bouncer. No words were necessary, I just peeked up at him with a devilish smirk, turned, and climbed the stairs away from him and up to the balcony. 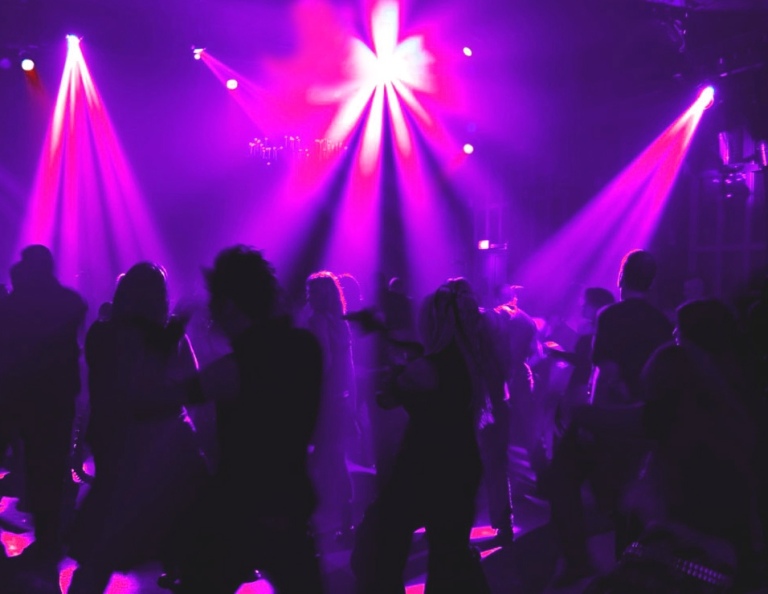 Tell me your secrets... Cancel reply